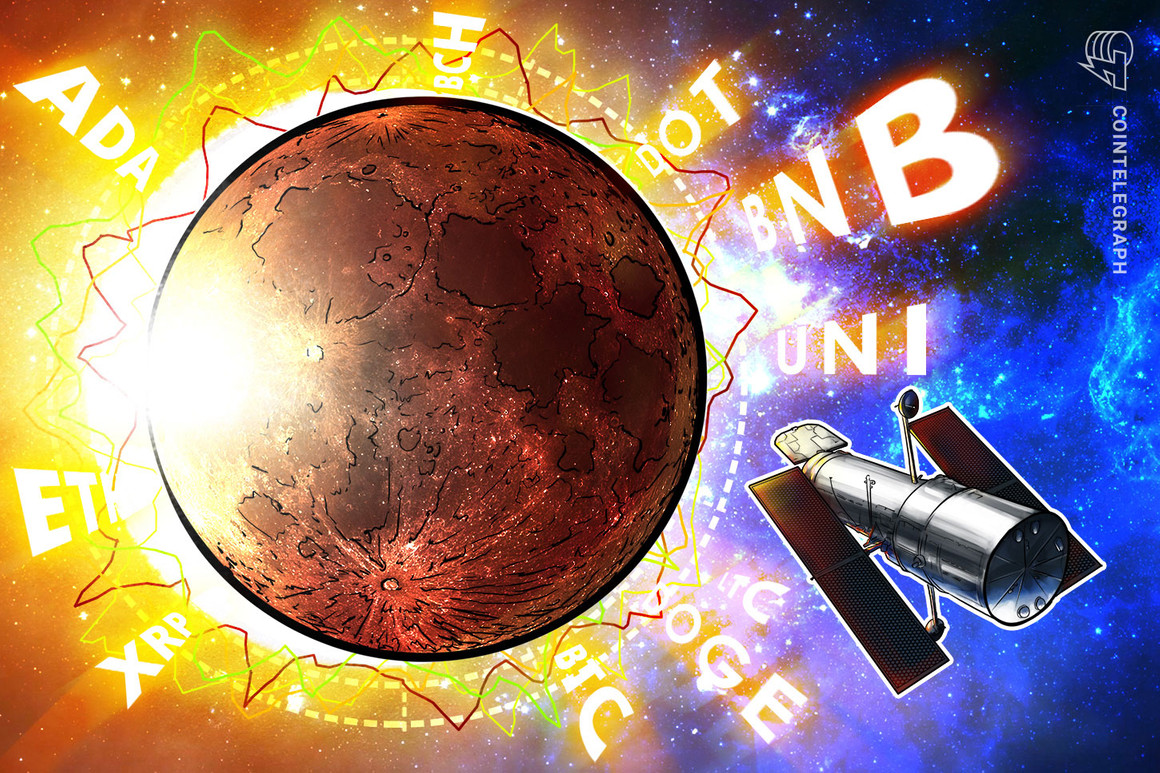 Ether (ETH) has been the star performer among major cryptocurrencies in the past few days as its rally has continued unabated. The second-largest cryptocurrency by market capitalization crossed the $3,300 today sending projects market cap to $381.6 billion.

Ether has now become the 24th largest asset in the world, vaulting the project above blue-chip names like Mastercard, NVIDIA, Walt Disney, Bank of America and Home Depot, according to data from Infinite Market Cap. This strong performance in Ether has also brought back murmurs of Ethereum flippening Bitcoin (BTC).

However, Ether has a lot of catching up to do if it wants to flip Bitcoin because its market dominance at 16.4% is much below Bitcoin’s 47%. Still, the rise of Ether is positive for the crypto sector because it is likely to attract the attention of institutional investors.

Fund managers will find it difficult to ignore the top two cryptocurrencies as their market caps surpass popular Wall Street names. This could continue to attract fresh money into the crypto sector and boost prices higher.

Let’s analyze the charts of the top-10 cryptocurrencies to determine their trend and the possible target objectives.

However, the wick on today’s candlestick shows that the bulls are struggling to sustain the price above $58,000. If the buyers fail to do that, the bears will make one more attempt to sink the price below the 20-day EMA.

Alternatively, if the bulls defend the 20-day EMA, it will signal strength. If the buyers can sustain the price above $58,000, the pair could start a gradual climb to the overhead zone. The next leg of the uptrend may start after the pair rises above $64,849.27.

Ether had been trading inside an ascending channel for the past few days. The bulls pushed the price above the resistance line of the channel on May 1, resulting in a pick-up in momentum. Ether could now rally to $3,513.

Both moving averages are sloping up suggesting that bulls have the upper hand. However, the RSI above 80 suggests the rally is overbought in the short-term and the ETH/USDT pair may soon enter a minor correction or consolidation.

If the bulls do not allow the price to re-enter the channel, it will suggest that traders are buying on dips as they expect the rally to continue. Conversely, if the bears sink and sustain the price below $2,850, the pair could drop to the 20-day EMA ($2,586).

After forming a Doji candlestick pattern on May 1 and 2, Binance Coin (BNB) has resumed its uptrend today. Both moving averages are sloping up and the RSI is in the overbought zone, suggesting the bulls have overpowered the bears.

If the bulls can sustain the price above $639, the BNB/USDT pair could start its journey toward the pattern target at $808.57.

Contrary to this assumption, if the bulls fail to sustain the price above $639, the bears will try to pull the price down to the 20-day EMA ($552). A bounce off this support will keep the uptrend intact.

However, if the price drops below the 20-day EMA, the pair could decline to the support line of the triangle and then to the 50-day simple moving average ($421).

If the uncertainty resolves to the downside, the XRP/USDT pair could correct to the 20-day EMA ($1.36), which is likely to act as a strong support.

The marginally rising 20-day EMA and the RSI near 61 indicate the bulls have the upper hand. This positive view will invalidate if the pair breaks the 20-day EMA support. Such a move will suggest that traders are dumping their positions and that could pull the price down to the 50-day SMA ($1.01).

The uncertainty following the inside-day candlestick pattern on April 29 resolved to the upside on April 30 and the bulls propelled Dogecoin (DOGE) above the $0.34 resistance on May 1.

VORTECS™ data from Cointelegraph Markets Pro began to detect a bullish outlook for DOGE on April 29, prior to the recent price rise.

As seen in the chart above, the VORTECS™ Score for DOGE flipped green on April 29 when the price was $0.30.

Since then, the VORTECS™ Score has largely remained in the green, barring a short-term dip below the 60 level. DOGE has rallied above $0.41 today, resulting in a 36% rally in roughly five days.

The rising 20-day EMA ($0.28) and the RSI near the overbought territory suggest the bulls are in control. The DOGE/USDT pair could now retest the all-time high at $0.45.

If the bulls propel the price above this resistance, the uptrend could resume with the next target objective at $0.65.

This positive view will invalidate if the price turns down from the current level or the overhead resistance and breaks the 20-day EMA support,

Cardano (ADA) has been sustaining above the 20-day EMA ($1.27) for the past few days, suggesting the bulls are in no hurry to book profits. The altcoin remains on track to resume the up-move and reach the $1.48 to $1.55 resistance zone.

The ADA/USDT pair may hit a wall at the overhead resistance zone as the bears will once again try to reverse the direction and keep the price stuck inside the $1.03 to $1.48 range for a few more days.

The marginally rising 20-day EMA and the RSI above 56 suggest the bulls have the upper hand. If they can drive the price above the zone, the pair could start its journey to $2.

On the other hand, if the price turns down from the current level and breaks below the moving averages, the pair may drop to the support of the range at $1.03.

After hesitating near the 50-day SMA ($36.94) on May 1 and 2, the bulls pushed Polkadot (DOT) above it today. However, the long wick on today’s candlestick shows the bears have not given up yet and are selling on every rise.

Both moving averages are flat and the RSI is just above the midpoint, suggesting a balance between supply and demand. This balance will tilt in favor of the bulls if they can push and sustain the price above the 50-day SMA. That could open the gates for a move to $42.28.

On the contrary, if the price turns down and slips below the 20-day EMA, the DOT/USDT pair may drop to $32.50. The bulls are likely to defend this level aggressively but if the bears overpower them, the pair could drop to support of the range at $26.50.

Uniswap (UNI) witnessed profit-booking at $44 on April 29 and entered a minor correction. However, the bulls succeeded in flipping the previous resistance at $39.60 into support, which is a positive sign.

The uptrend has resumed today and the UNI/USDT pair has risen to a new all-time high at $45. Although the RSI is still warning of a negative divergence, the upsloping 20-day EMA ($37.41) suggests the bulls are in control.

If the bulls sustain the price above $44, the pair could rise to the resistance line of the ascending channel at $50. This bullish view will nullify if the bears sink the price below the 20-day EMA. The pair could then drop to the support line of the channel.

After a one-day correction on May 2, Litecoin (LTC) has started its northward journey today. This suggests the sentiment remains bullish and every minor dip is being purchased. The bulls will now try to push the price above the 61.8% Fibonacci retracement level at $286.02.

This positive view will invalidate if the price turns down from $286.02 and slumps below the 20-day EMA. Such a move will suggest that traders are closing their positions on relief rallies. That could result in a drop to the 50-day SMA ($230).

Bitcoin Cash (BCH) turned down from the 61.8% Fibonacci retracement level at $1,012.29 on May 1 but the correction was short-lived as the bulls purchased the dip on May 2. This suggests strong demand at lower levels.

A break below this level will suggest the bullish momentum has weakened and that will open the doors for a possible drop to the 50-day SMA ($703).