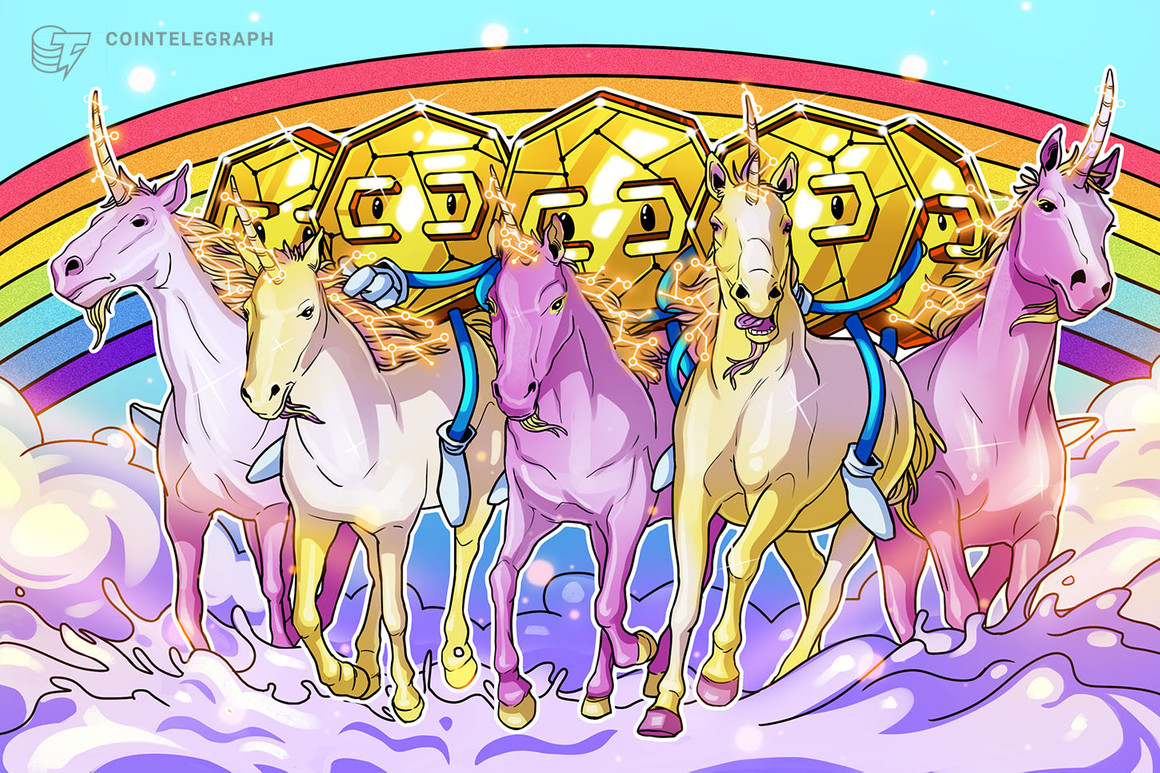 Unicorns are typically privately held startup companies valued at more than $1 billion, but traditional finance is increasingly applying the term to high-value cryptocurrencies that institutions are only now gaining exposure to.

The entrance of institutional investors into the cryptocurrency sector over the course of 2021 has been one of the driving forces of growth for the ecosystem as a whole as multi-billion dollar companies like Tesla, Square and MicroStrategy have converted a portion of their cash reserves into Bitcoin (BTC) and other top altcoins.

These are the top 8 #Bitcoin holding public companies.

Decentralized finance (DeFi), nonfungible tokens (NFT) and oracles have been some of the hottest growth sectors of the cryptocurrency ecosystem, helping propel multiple projects to Unicorn level status, while stablecoin-related protocols have also vaulted in value as they help provide a solid foundation for the industry to grow from.

On that thread, here’s an update on some of the top crypto unicorn projects, as well as an introduction to some of the newest arrivals to the billion dollar club.

Nonfungible tokens took the world by storm over the past two months as celebrities, influencers, fast food restaurants and established auction houses jumped on the bandwagon to take part in the creation, sale and distribution of one-of-a-kind digital assets.

Enjin Coin (ENJ) has been one of the biggest beneficiaries of the rise of NFTs which helped rocket the price of ENJ to an all-time high of $3.08 on March 15 and firmly elevated the project to Unicorn status with a $2.6 billion market cap.

The upcoming launch of JumpNet on April 6, will enable the zero-fee creation and distribution of ERC-1155 tokens in the Enjin ecosystem and community excitement over this launch appears to be keeping investors bullish on ENJ.

Other notable NFT-related arrivals to the Unicorn club include the virtual reality platform Decentraland (MANA), which enables the purchase of digital plots of land that can be developed and monetized, and Flow (FLOW), a developer-friendly blockchain designed to be the foundation for “the next generation of games, apps, and the digital assets that power them.”

The impact that decentralized finance has had on the cryptocurrency ecosystem is undeniable as much of the growth in the sector over the past two years can be attributed to DEXs like Uniswap and yield-farming platforms like Yearn.finance (YFI).

High transaction costs and network congestion on the Ethereum network triggered an exodus of users and liquidity to cross-chain compatible platforms and also helped to raise several DeFi protocols built on the Binance Smart Chain (BSC) above the billion-dollar mark.

PancakeSwap (CAKE) has been one of the shining stars of BSC, rapidly climbing up the charts during the months of February and March to hit a market cap of $2.55 billion.

Data from Defi Llama shows that CAKE is now ranked as the fifth-largest DeFi platform by total value locked with $6.18 billion currently locked in the protocol.

One protocol that operates on the Binance Chain and the Ethereum network is THORChain (RUNE), whose 700% price growth since January 1 has lifted the project’s total market cap to $1.95 billion.

Recent optimism for the project has been centered around the launch of THORChain Multichain, which committed to genesis on April 2 and is expected to launch between the 13th and 16th of April.

Platforms that offer a lower fee environment to that of Ethereum, including layer 2 solutions and separate blockchain networks, have received extra attention over the past two months due to record-breaking gas costs.

As the token that powers transactions on the BSC, Binance Coin (BNB) has seen its price surge enough to vault the token into the top 3 by market capitalization, which now fluctuates around $53.55 billion.

Polygon (MATIC) has also risen in stature to become one of the chosen layer 2 protocols for the Ethereum network following its pivot to become the “Polkadot on Ethereum” and help stem the tide of projects and liquidity leaving the network.

With many popular unicorn-level projects already operational on the Polygon protocol, including Aave (AAVE) and SushiSwap (SUSHI), MATIC looks well-positioned to continue its gallop higher as a rising unicorn star.

Stablecoins and their associated protocols received a boost early in 2021 when the U.S. Treasury’s Office of the Comptroller of the Currency gave the green light for national banks to run independent nodes for distributed ledger networks.

After Bitfinex and Tether settled their landmark case with the Office of the New York Attorney General, enthusiasm for stablecoin projects further increased as the market caps for Tether and USD Coin (USDC) increased by billions of dollars.

One protocol with a stablecoin component that has made great strides in helping establish a stable store of wealth in countries experiencing hyperinflation like Venezuela is Reserve, whose Reserve Rights (RSR) token has increased by more than 400% in 2021.

Another new entrant to the stablecoin field is TerraUSD (UST), whose market cap skyrocketed from $182 million on Jan. 1 to $1.66 billion on April 2 as its native Terra (LUNA) blockchain protocol, which specializes in the creation of fiat-pegged stablecoins to power price-stable global payments systems, has seen its price rally 3,000% since the beginning of the year.

Several projects with specific use-cases and first-mover advantage have joined the unicorn herd by offering unique solutions to problems faced in both the cryptocurrency and traditional sectors.

Theta (THETA) has been a stand-out performer for the blockchain industry in 2021 as the streaming video-focused platform has seen its token value swell more than 900% since early January after several high-profile announcements led to record-high trading volumes for the token.

The blockchain-based web browser and digital advertising platform Basic Attention Token (BAT) managed to achieve a unicorn-level valuation thanks to its own NFT and DeFi related announcements, with the project unveiling plans to launch a DEX aggregator and NFT wallet in its next browser.

Helium (HNT), a decentralized blockchain-powered network for the Internet of Things (IoT) devices through a network of nodes (hotspots), has also recently joined the unicorn club.

Running a hotspot on the Helium network gives the user a low-cost opportunity to participate in mining to help maintain network security at a fraction of what it costs to mine Bitcoin and Ethereum.

This is helped create a global network of more than 25,000 hotspots and a total market cap of $1.12 billion for the HNT.

Now that institutional investors are slowly gaining exposure to the cryptocurrency asset class, the number of unicorn-level projects is likely to continue to increase as traditional finance embraces the rise of DeFi and digital assets.