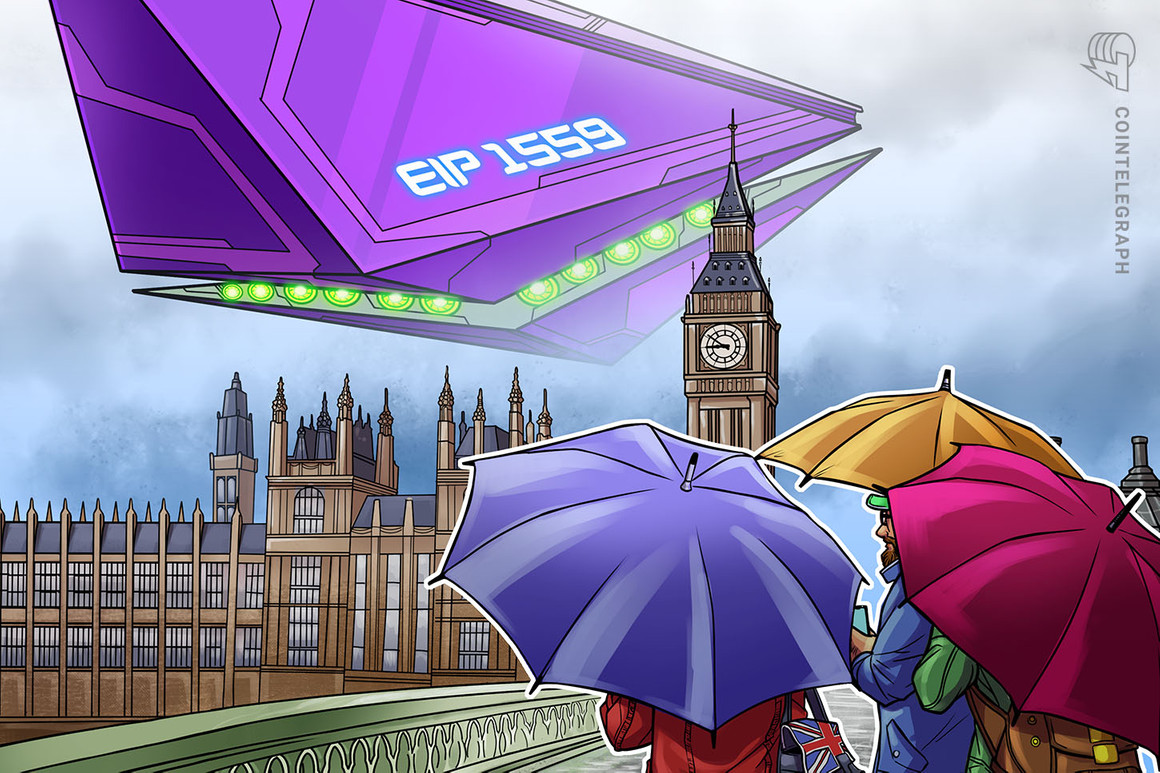 The Ethereum Improvement Proposal 1559, set to be bundled together with the “London” upgrade in July, has caused as much excitement as fear and panic. On the surface, EIP-1559 is nothing more than a change in Ethereum’s gas fee structure. And to spice it up, it has also been labeled as Ethereum’s scarcity engine, or burn mechanism, as it will destroy Ether (ETH) used in transaction fees, making the cryptocurrency deflationary, and perhaps more valuable down the line.

Curbing Ether’s inflation will make the digital asset as deflationary as Bitcoin (BTC), meaning that its buying power will only increase over time. However, the relevance of the EIP-1559 proposal is based on fixing the runaway gas fees. The upgrade has been in the works for some time, but its timing couldn’t have come at a better time. Ethereum’s sky-high transaction fees are a result of the network being the most used blockchain in the world. This is partly due to its smart contract functionality, something that Bitcoin’s blockchain is limited in.

Ethereum’s functionality has seen it being used as the backbone of several booms in the sector. First, it was initial coin offerings, then came decentralized finance and now nonfungible tokens. To have a better understanding of the relevance of EIP-1559, we need to step back and take a look at the current gas fee model and why it needs to be changed for the good of the ecosystem, although it will leave some miners with a sour taste in their mouths.

Transactions on the Ethereum blockchain

Any form of activity done on Ethereum is recorded on the blockchain, and the accompanying change is considered to be a transaction. Each transaction comes with a cost, which serves two purposes. Firstly, the transaction costs are meant to discourage bad actors from spamming the network. And secondly, they are meant to incentivize miners who maintain the network by confirming transactions.

The Ethereum network currently uses an auction system to determine the gas fee. This basically means that there is no specific transaction fee, and the actual amount paid depends on factors that include network traffic. In theory, users who offer to pay more will have their transactions prioritized and confirmed early. But just like any auction system, the price could go really high. In February, Ethereum’s transaction fee surpassed $39 for the first time.

This spike has benefited miners, who for obvious reasons want the status quo to remain unchanged. It is argued that the EIP-1559 upgrade would reduce transaction costs by as much as 90%, but this can only be confirmed if and when it goes live.

Related: Ethereum network in a fee spin: Can the Berlin upgrade save the day?

For the broader Ethereum community, EIP-1559 is a welcome upgrade, perhaps long-overdue.

The EIP-1559 upgrade proposes to use flexible block sizes instead of fixed block sizes as has been the norm in proof-of-work systems. To do this, EIP-1559 uses a two-tier system consisting of a base fee and tips.

The base fee will be payable in Ether, and its price will constantly change depending on the network congestion. The new proposal aims to keep the network utilization at 50% or below. If the network usage surpasses this threshold, the base fee will increase as well. This predictable pricing model is meant to remove the burden of setting the price from users and pass it on to be set automatically by wallet providers. The base fee would then be burned after collection, meaning that miners won’t be pocketing transaction fees anymore. This will make Ether a deflationary asset, propping up its price over time.

Tips are slightly different from the base in the sense they are not mandatory. And unlike base fees that have to be destroyed, tips are kept by miners. Under EIP-1559, blocks will not be completely full, providing miners the space to allocate transactions to users who would be willing to pay a premium to have their transactions included in the next blocks. However, miners do not have control of the fee structure and feel let down by the proposal.

Miners are not amused by the EIP-1559 proposal

No one in life is ready to let go of their meal — same goes for Ethereum miners. In February alone, miners’ revenue reached a record of $1.3 billion, half of which coming from transaction fees. Miners have been campaigning against the EIP-155 proposal because it is estimated that it will cost them as much as 50% of their revenue. The issue has gone as far as some pools threatening to band together as a show of force. While it may not incentivize them to effect a 51% attack on the network, the possibility that they can do it will likely give developers sleepless nights.

This also shows that blockchain networks are at the mercy of large mining pools. And if it is only ethical and economic reasons preventing them from harnessing their hash rate for their own nefarious benefits, then blockchains may be far from being secure. At some point, they may have enough reasons to take over the network.

On the other side, the miners’ loss is a win for DeFi projects.

The new fee structure will allow DeFi projects to pay less for their transactions on the Ethereum network. And in the long run, this will reduce the number of projects migrating to other blockchains.

But making Ethereum transition into a more scalable network is doing so at the expense of miners who have not hidden their displeasure about the proposed changes. There is still a long way to go before Ethereum gets where it wants to be, and some stakeholders will be burned along the way.

The views, thoughts and opinions expressed here are the author’s alone and do not necessarily reflect or represent the views and opinions of Cointelegraph.

Michael J. Garbade is a co-founder and the CEO of Education Ecosystem. He is a serial tech entrepreneur who formerly worked at Amazon, General Electric, Rebate Networks, Photobucket and UniCredit Group. Garbade has experience working in the United States, Europe, Asia and South America.