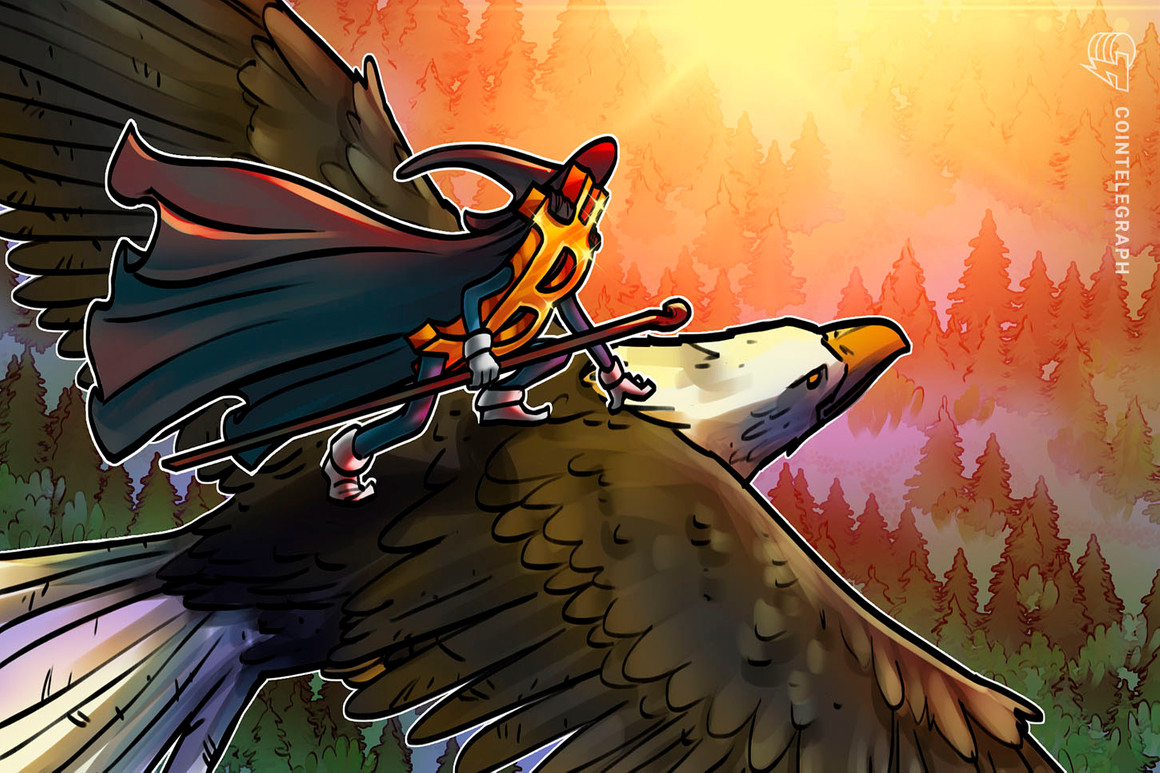 Throughout the middle of March, many Americans received stimulus checks from the government, and while the payments — $1,400 for every U.S. citizen earning less than $80,000 annually — will be a blessing for millions in desperate economic straits as a result of the COVID-19 crisis, it has raised again the specter of inflation. And as with many other things, this too has a Bitcoin (BTC) angle.

On March 15, Galaxy Digital CEO Mike Novogratz proposed on NBC’s Squawk Box a new role for Bitcoin in light of recent stimulus measures — as “a report card for how citizens think the government is doing managing their finances.” If people believe that U.S. Treasury Secretary Janet Yellen et. al. can safely land this “giant supertanker” that is fiscal and monetary stimulus, said Novogratz, then “people will stop moving into Bitcoin.” But for now, “we’re in uncharted territories in how much money we’re printing, and Bitcoin is a report card on that.”

Podcaster Preston Pysh urged something similar a few days earlier in response to the news that the U.S. House of Representatives had passed the $1.9-trillion COVID relief package: “Think of #Bitcoin like a manipulation gauge.”

What is one to make of this? A new and exciting use case for the world’s first cryptocurrency — i.e., as a sort of a feedback tool for monetary policymakers? Or just another fantasy of Bitcoin maximalists?

“No evidence” that Bitcoin is a hedge

David Yermack, a professor of finance at New York University’s Leonard N. Stern School of Business, rejected the notion that BTC could serve as a “report card” for governments, telling Cointelegraph: “There’s no evidence that Bitcoin provides a hedge against movements in sovereign currency.” He added that “when one looks at large samples for research purposes, evidence has been very hard to find in a statistically rigorous sense.”

Bitcoin is much too imprecise of a measure, others say. If inflation rises 2.4% over the course of the year, as the Federal Reserve recently forecast, will BTC’s price also rise 2.4% — or some constant multiple thereof? Or conversely, if the Fed tightens up the money supply, tamping down inflation, will BTC’s price also fall in step? BTC basically has to be highly correlated with the inflation rate to be useful as a feedback tool, and that seems unlikely.

“The surge of liquidity from the Fed has fueled gains in virtually all major asset classes, with some pure speculative plays such as Bitcoin benefiting even more,” Eswar Prasad, a professor of economics at Cornell University and senior fellow at the Brookings Institution, told Cointelegraph, adding:

“It is unlikely that Bitcoin prices will be seen as a reliable guide of any sort for monetary policy, particularly since it is traded in a relatively thin market that seems subject to manipulation and speculative waves.”

Novogratz mustered some support for his hypothesis, however — on Twitter at any rate. On Feb. 28, he took an informal survey, asking: “Is $BTC a report card on monetary and fiscal policy?” When the 3,000-plus votes were tallied, 70.8% answered “yes,” and 29.2% replied “no.”

Nik Bhatia, author of the book Layered Money: From Gold and Dollars to Bitcoin and Central Bank Digital Currencies and adjunct professor of finance and business economics at the University of Southern California, told Cointelegraph that one has to separate fiscal stimulus from monetary stimulus.

According to him, In the short term, there is clearly a positive relationship between fiscal stimulus and the price of Bitcoin. When people have new stimulus checks in their pockets, they are more likely to buy Bitcoin, which will increase the price of BTC. Indeed, a recent Mizuho Securities survey said U.S. stimulus checks could raise the market cap of Bitcoin by as much as 3% — though this survey had a small sample size.

In any event, It’s more difficult to show the connection between monetary stimulus and BTC, continued Bhatia. In the long term, most Bitcoinists probably believe that there is a positive correlation between monetary stimulus and BTC — that is, people alarmed by stimulus-created inflation will seek a haven in BTC, “but it is impossible to prove.” In Bhatia’s view, the reason that BTC’s price is rising now — and will continue to do so — is the cryptocurrency’s “growing dominance in the international monetary system,” he told Cointelegraph.

A store of value and investment asset

While some say Bitcoin may not have any immediate future in this one specific use case — as a gauge for monetary policy — it still has other related use cases, including “insurance against unhinged monetary policy and outright wealth segregation in some countries,” as Ark Investment Management’s Cathie Wood said recently at a Bloomberg event.

Wood added that BTC was gaining increasing recognition from institutions as an investment asset class, and it might even replace bonds in the traditional 60/40 stocks/bonds model portfolio, a view echoed by podcaster Graham Stephan, who anticipated a new model portfolio along the lines of 70% invested in stocks, 15% in bonds and 15% in BTC someday.

Scott Freeman, co-founder and partner of JST Capital, told Cointelegraph: “We do see that there are more traditional investors who view BTC as a hedge against undisciplined monetary policy. We’ve seen that this has already driven demand in third-world countries, and we expect this to be a self-fulfilling prophecy as more people buy into this thesis.”

But this is different from a report card or a manipulation gauge that attaches a number or a grade to a government’s performance. BTC is still too volatile and thinly traded to be useful for that at present, Freeman opined, adding:

“I think BTC will be more of a lagging indicator of the lack of faith in monetary policy, at least in the short term. Though, what we’ve all learned over the past years is that it is a bad bet to underestimate the growth of BTC and its effect on global financial markets.”

It’s worth remembering, too, as Jeff Dorman, chief investment officer of Arca, told Cointelegraph, that since the United States embraced an “aggressive monetary policy” in 2009, investors have been looking for ways to hedge against inflation. They’ve tried buying gold, and also shorting treasuries and/or European government bonds. “None of the traditional methods have worked,” said Dorman, adding: “Bitcoin has been the only winner for the past decade.”

Recent government stimulus measures probably strengthen the argument for Bitcoin, Dorman continued, but BTC has made little impact upon policymakers due to its “small size and limited touch size.” But the times are changing. This past week, Deutsche Bank analysts declared that Bitcoin had grown “too important to ignore,” and with so many different types of investors gravitating to BTC now — banks, brokerages, insurance companies, hedge funds, corporate treasurers, individuals — Dorman said:

“They have no choice but to pay attention. So, I don’t think Bitcoin is a report card, nor driving any policy decisions — but if it continues to penetrate all facets of finance, then it will become a gauge that needs to be monitored.”

Use cases can’t be forced

But if BTC isn’t yet a gauge or feedback loop, what is? How is one to recognize if governments are losing their grip? There’s always the traditional inflation indexes, such as the Consumer Price Index and Producer Price Index — ie., the official measures — Mauro F. Guillén, Zandman professor of international management at the Wharton School, told Cointelegraph, where “anything above 3%–4% starts to be a problem.” He added:

“Cryptos are very small right now compared to the trillions and trillions of dollars in circulation. Moreover, they are just an investable asset. They are not yet used as a generalized form of payment or as a unit of account.”

In short, given that Bitcoin is only 12 years old, volatile and owned by only 1.3% of the world’s population (perhaps), expecting that it can become a report card on government monetary policy seems premature.

BTC today is a promising store of value, a growing investment asset class, and one day, it may have other uses, including as a medium of exchange and/or unit of account, but those future use cases will emerge organically and probably can’t be forced.

What determines the Bitcoin price?
Why Ethereum Could Trade At $500 If These Conditions Are Met
Crypto Losses? Koinly Reveals 5 Tax Hacks You Need Now
Governments, enterprise, gaming: Who will drive the next crypto bull run?
CFTC brings $1.7B fraud case involving Bitcoin against South African national